Contemporary beer styles are based upon the work of Michael Jackson from the seventies and are part of an Anglo Saxon system. This serves the purpose of giving potential drinkers an idea of what they can possibly expect from a certain beer.
Because in the seventies there was hardly any beer culture left in the Netherlands the old historic styles never entered the system. The situation right now is that beer styles that existed for many centuries, in fact longer than any other style and available once more today, have no representation in the system.
We received comments about the Dutch beers not being true styles. Beer-style is a modern concept and perhaps not appropriate for the very old beers of the Netherlands so we'll call them 'beer-names'. Which are these beer-names?

Ael
The oldest beer-name in Western Europe. In England it is called Ale and in Scandinavian countries Øl. Very old references can be found to the brewing of Ael, like the one shown here anno 1322 and 1252. 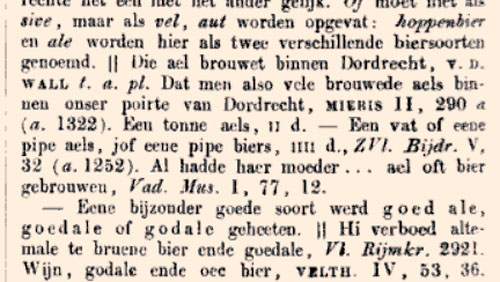 Gruytbeer
Called after a mixture of herbs. Old Gruyt regulations were the basis of the taxation of beer. The beer was durable for up to about one week, so only suited for small batches.

Hoppenbeer
The first modern durable beer from the Hanseatic sphere and Holland. Hoppenbeer was largely made with oatmalt (75-80%) and the rest wheat. No barley was used at all in this beer-style that lingered on until early 16th century. Hoppenbeer in Holland was made after the Bremen and early Hamburg example.

Jopen beer
This is a typical example of a generic beer style. 'Jonker of Dubbeld Bier over there, by us called Jopen-Beer' as sources indicate, could very well be made in Holland in various places. The references about Jopen beer in Zwolle, the Netherlands, (1605) are just a few years apart from the vogages of Willem Barentsz… 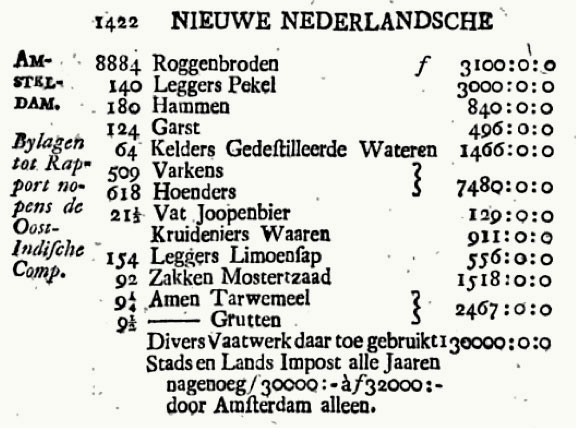 Joopenbier was one of the VOC ships beers in 1791

Koyt
The first completely Dutch beer was developed after and next to Hoppenbier. Because there was no fixed spelling we find Kuit, Koite, Koyt and more variations. Some think it was made without hops but that is highly unlikely. This misunderstanding is either because of confusing Gruyt with Kuyt or by misinterpreting 'old recipes'.

Poorter
This local city beer probably emerged to protect the local beer from the rising tide of export or 'strange' beers. Mentioned from early 14th century ('na allen ouden haercomen' after the old custom) until the first Porter was made in England. After that Poorter became synonymous to Porter and referred to the English beer. Poorter and Schipluyden beer form an old kind of classification, like white and brown beers, and later brewers will state the're making Burger and Scheepsbier (Civil and Shipsbeer).

Schipluyden
Naval beer was called Schipluyden in early times after the Dutch word for sailors. We encountered the name in old regulations. The long sea voyages to the West and East Indies meant an extra focus on durability.

Luyks Beer
Luyks Beer was a true beer-style from the 17th century onwards and was brewed in various places like Delft and 's-Hertogenbosch (Duke town) in the Netherlands. Hops came from around Liége south of Maastricht, but truly distinctive was the use of spelt malt as the main cereal grain used. It was administered in Batavia and brought to the East by the Dutch East India Company.

Various beer-styles in a 1700 advertisement

Mom
Regular Mom comes from Brunswijck or the contemporary German town of Braunschweig. Next to that we find 'all different kinds of Mom' in old tax registers as it became a real beer style that was made in various places. Heavy dark beer, mentioned from 1390 onwards.

Mol
A kind of old white beer from Nim-wegen, Nieuwmeegsch, Nimmiƒchen mol or in contemporary language Nijmegen, the Netherlands. Around 1550 there was a dispute between Antwerp and Nijmegen about the high taxation of Mol. Around that time it was very common that the region we call Belgium now imported beer from the North. Here we see it mentioned in 1622 but around the 18th century it was a real phenomenon mentioned especially next to regular beer. 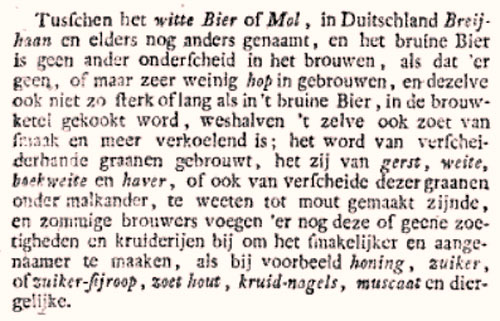 Pharao and Israel beer
In the Dutch towns Delft and Dordrecht, but according to the second text below also in England there was production of these beers. They refer both to the stubborn Pharao who didn't want to let the people of Israel go, but also to the ancient Egyptian beer. The Israel-beer probably originated in Lübeck.

In Barley in England there used to be a famous pub called 'the old Pharao', referring to the so called beer. Because Pharao was stubborn and so was the beer: because Pharao didn't want to let these folks go, nor the beer. 1868

In all publications about beer one can read about the Lambic of Brussels and Faro derived from that. In fact sources point out the other way around; Pharao - Faro is the source (from Delft, Dordrecht and Zeeland, the Netherlands) and Lambic is derived from that. Needless to say this is highly controversial; I know. But have a look in my sources...

Meuƒelaar and Val
From the same region are these probably somewhat lighter beer styles. The document below from 1582 states generously that  certain fieldworkers didn't need to pay full taxes for the beer they had during their labour. 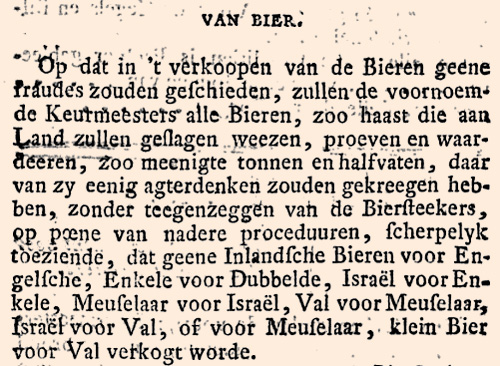 And again these kinds of beer keep showing up for centuries in various publications and lists. Above and elsewhere we also see examples of further indications like Enkel and Dubbel.

Princess beer
Compared to the before mentioned beers this Princess beer is relatively new. Our sources do not go back any further than first half 18th century, at the early days of de Gekroonde Valk brewery. They mentioned this as their export beer to the east and west colonies. It seems obvious other grains than barley were used in this beer (princess-malt?). 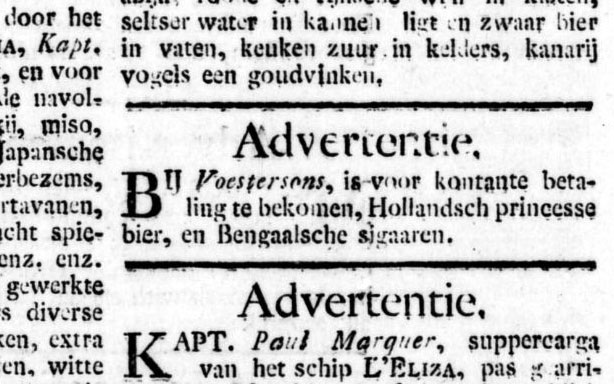 Further indications
Today we know the Belgian beer style Dubbel but in old times we often see 'dubbel' as a further indication of the existing styles above mentioned and then it says something about brewing method, strength, quantity of raw materials and the like. Other indications are terms like 'swaer' en 'goet' (heavy and good).

Today
Especially lately some of the above mentioned beers are once again available, be it on a limited scale. And then, remembering the quotation of Michael Jackson below, people write about it.
Writing is to be understood in a broad manner, ridicule, denial and the like are all part of the game. This way it comes alive once more and we save a beer style. Time for some real Dutch beer.

'How to save a beer style; There is no set procedure, but it starts with writing about it' Michael Jackson