Beer styles in their historical context

The history of several beers in the Low Countries go back in time so far that several concepts lose their ordinary meaning. Terms we use nowadays, like 'recipe' and 'ingredient', but also the concept of beer style itself, have to be seen in their historical context.

Small walled cities
At the end of the middle ages, around the 11th century, many new cities emerged in the Low Countries. These cities were so small that the term 'city' could be confusing for a modern man. There's no more than a few hundred to at most a few thousand people living there. Together with the 'vrijheid' or freedom surrounding it, this city is self supporting and able to defend itself. 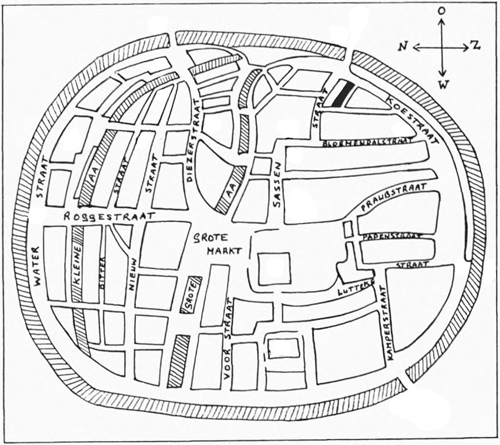 Along the upper right wall is room for the cows that are brought in at night. The blackened square there, is the old Witte Klavervier brewery in the Koestraat or Cow street in the Hanseatic town of Zwolle, the Netherlands.

Guilds
People specialize in various trades and crafts and the brewers guild defines how and what beer is made. Practical experience and rules evolve into process technology in the ages to come. Although yeast is unknown we encounter the mysterious 'fermentum'. That seems rather primitive perhaps but I think there might also be some little substances today we don't fully understand.

Protectionism
City government regulates some things like the volume and frequency of brewing beer. But as the first 'strange' beers arrive it's time to make some special rules like this one from 1301: One can bring strange beer into the city but than you have to pay tax. Also it is not allowed to sell any 'dierre' or dearer than Poorter.

Recipes
A 'recipe' of Koyt from 1452 is like this, translated: 'To the brewing of thirty-two barrels of regular Koyt one has to use three 'molder' or units of wheat, six of barley and nine of oat and double Koyt would mean you only fill twenty barrels. There's no yeast or hops mentioned because they are part of the above experience and rules.

Context
The community is so small that everybody knows exactly what beer is made and by whom, for one drinks it daily and probably knows the brewer personally. This is the context and origin of the first beers styles. Later everything will change and get ever more complicated. The cities grow and there are many influences and developments.

Heritage
The mentioned Poorter and Koyt are around for ages to come together with some other kinds and that is unique. That these beers and styles change over time is understood. Nowadays beers and styles also evolve over our narrow time-frame.