Simultaneous with the birth of Porter in early 18th century London, a new beer-style emerged in Amsterdam: princess beer (princesse bier). Like in the case of contemporary early Porter is was unclear what made the exact distinction between this and other beers, even more so because Prinsess beer could be blonde as well as brown. Still there is about enough information to write a provisional history of Princess beer. A clear distinction should be made between the 18th century variant and the later 19th century beer that had changed from a quality export beer to a cheap domestic product.

The brewer and founder of the Gekroonde Valk (Crowned Falcon) in Amsterdam had gotten his license to brew in 1733 next to old and established breweries like De Haan, the Star and the Hooiberg. His brewery started as The Falcon, but soon became The Crowned Falcon (Gekroonde Valk), and together with names like ‘Princess Beer’ he made it very clear that in the separation that started to divide the Dutch Republic, with patriots and those in favor of the royals, he sided with those last ones. He was not hindered by tradition at all and made sure his ‘civic, ship and export beers’ where modern and distinctive (1). It is highly likely that he knew about recent and international developments, especially those in London.

Princess-Beer for the East-Indies and other Regions in 1749

In London we see porter being made to fit market demands in ways of pricing, taste and appearance and the beer was cleared and colored with natural aids like isinglass and elderberries. Michael Combrune states about isinglass ‘it is imported from Russia by the Dutch, and from them to us’ (2). ‘The brewing of Princess beer for East India and other regions’ was done in the same fashion because customer demand and pricing were key, especially for a new contender on the shrinking Dutch market. Thus princess beer became a durable export beer long before India Pale Ale.

To make the beer clear ‘known and harmful substances where employed and mixed’ (3), but probably the clearing methods of the time were not that bad at all. They would bind proteins and other floating matter and disappear out of the beer in a natural way. Clearing had become quite fashionable; people wanted a transparent beer and ridiculed the ’Muddy Mum’ that was still much in demand outside of London.

Princess beer must have looked nice and modern, the royal name that was used earlier (1658) for ‘distilled Princess-water’ will, because of it’s place in time, first half of the 18th century, have meant something of a political statement in the growing division between republicans (patriots) and royals (Orange-ists). To become a real style a beer must be copied by others, and many did, like in Brugge ‘free and big-time brewer’ Anthonius Parmentier made ‘white Dutch Princess Beer’, ‘as is made in Amsterdam, Rotterdam and Alkmaar’. In his remarkable advertisement (4) he states that he could tailor the beer exactly to the voyage and for a fair price.

The last time the original Princess beer is mentioned is by the German brewing expert Johann Leuchs, who writes about the Amsterdam way of brewing, with ‘Princessinnenbier’ as the absolute top product (5). Princess beer stayed around untill far into the 19th century but as with most Dutch styles the quality dropped untill it was just a name for any cheap beer (6). But not after generations of people tasted the proud and clear but sometimes expensive beer in East India and other regions (7).

Jan van den Bosch Cornelisz. the brewer of the Falcon started his 'royal' theme in naming his brewery the 'Crowned' Falcon in 1734. This is also the advertissement where he declares to start brewing ‘civic, ship and export beers’.

(2a)
The London and Country Brewer
The Third Edition, Corrected.
London
1737

p.60
Of Brewing Butt Beer called Porter.
For making this Drink with a good Body, they commonly draw off a Barrel and a Firkin, or a Hogshead, from a Quarter of brown Malt, and sell it for Twenty-three Shillings, per Barrel. But this is govern'd by the Price of the Customer; so that two or three Sorts are sometimes carried out from one Brewing

p.67
For I know some Brewers that are seldom at a greater Expence than Elder-berries and Isinglass for their brown Drinks, and but little otherwise for their Pale

(2b)
An Essay on Brewing
With a View of Establishing the Principles of the Art (Google eBoek)
Michael Combrune
London:
Printed for R. and J. Dodsley, in Pall-Mall.
1758

p.12
Isinglass, a preparation from a fish call'd Huso, somewhat bigger than a Sturgeon; a solution of which, in stale beer, is us'd to fine or precipitate beers: it is imported from Russia by the Dutch, and from them to us. 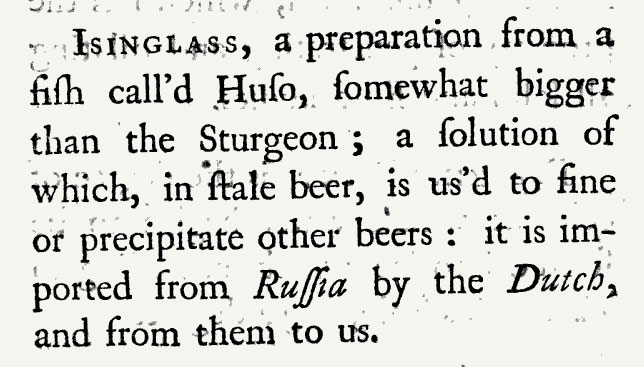 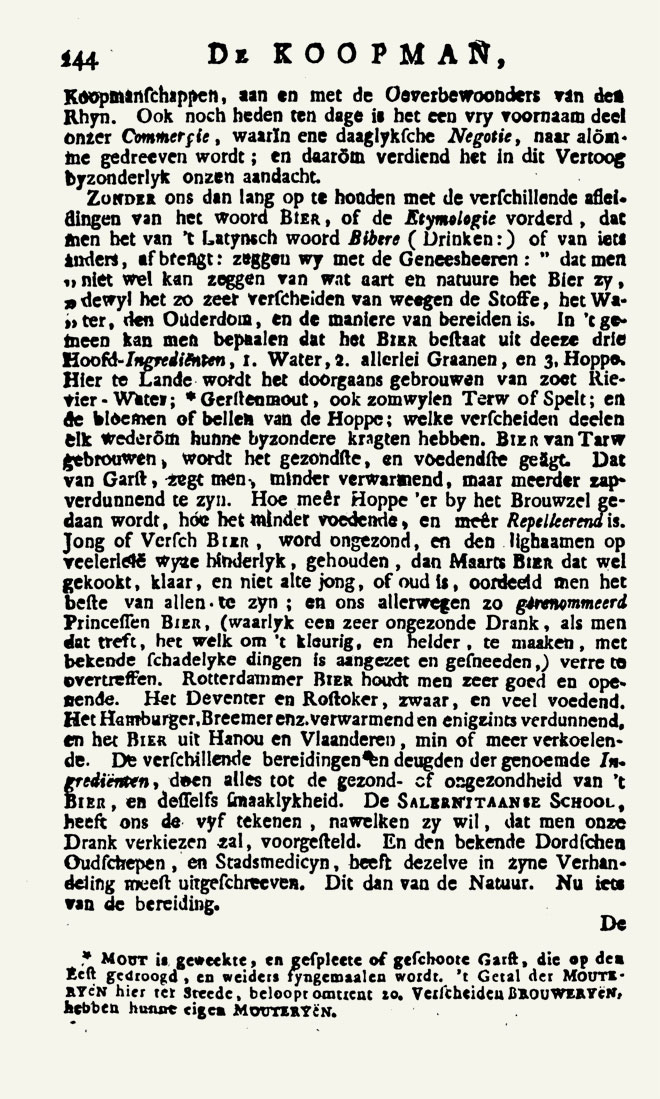 Translation from Dutch:
Anthonius Parmentier, free and Large Beer Brewer, living in the Brewery de twee Eeuwen (the Two Centuries) at the d'Hoogstraete tot Brugge (Highstreet in Brugge), declares to all Gentlemen Merchants and Sailors, that he outside his white Hoogaerdsch-Bier, that he has by now made and delivered for a year by tuns and hogsheads to full satisfaction of those, who have had interest in them, also brews white Holland Princess Beers, like one in Amsterdam, Rotterdam and Alkmaar is offering, being a kind of Beer, that can securely without the slightest change be transported to the French islands and to the East- and West-Indies, sufficiently known by all Gentlemen Seamen; advertising further to all Gentlemen Ships-Captains, that they can have their barrels filled each and every moment with fresh Beers, that he will make on purpose to their orders after the degree of the passage and to a civil price. 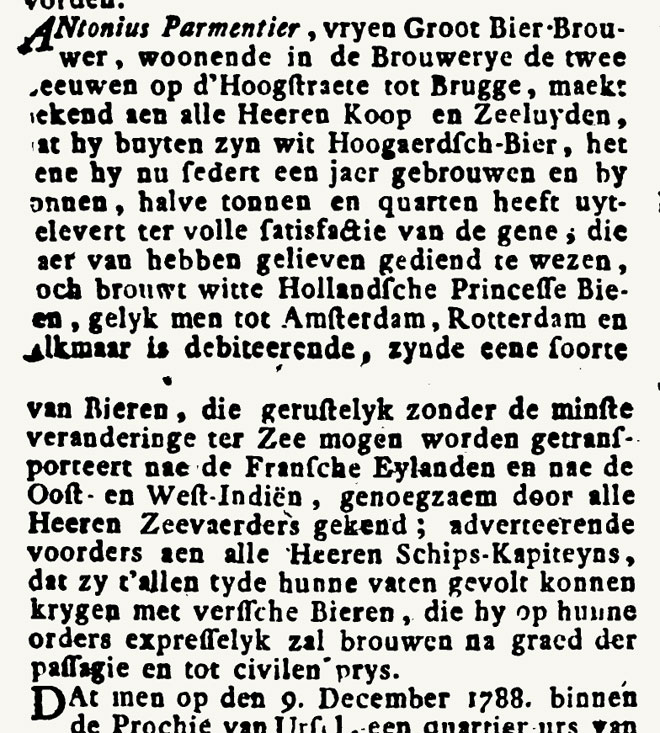 Beer is made over here with just barley and is named after its price. There is six guilders up to eighteen guilders beer. The best variety is Princess Beer.

Malting is done from november until april. Brewing is done all year long. Mashing in with lukewarm water, there is three infusions. These three steps together with cooking takes 24 hours.

Various mixtures of the three worts gives 7 to 8 kinds of beer. Only Princess Beer is taken to the colonies. It is durable for 2-3 years; the other kinds are drank within 8-15 days from production] 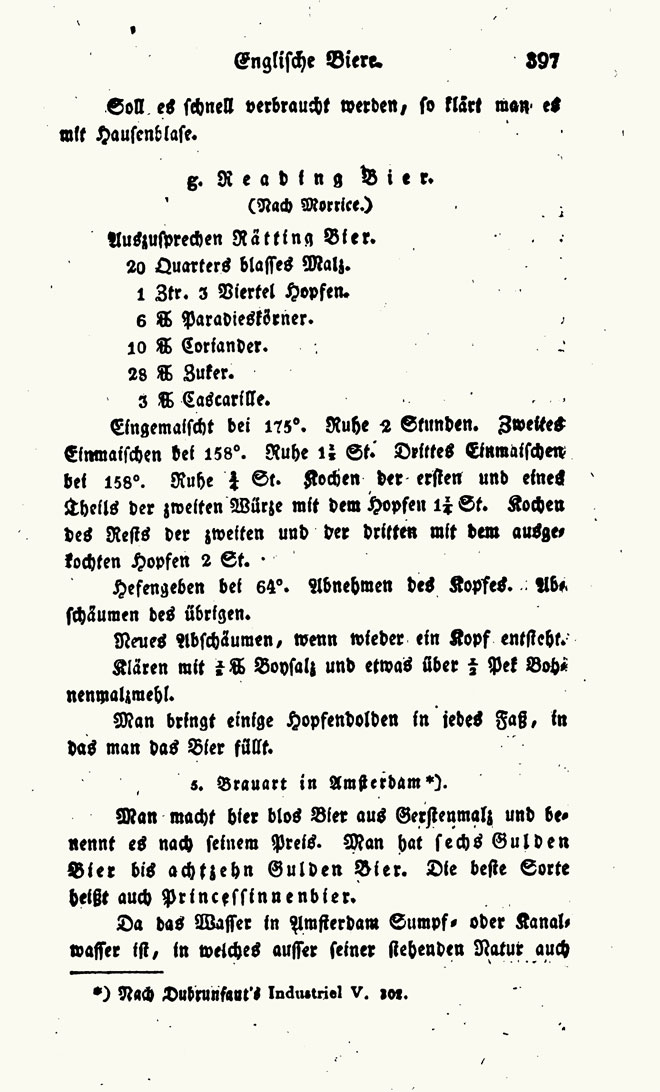 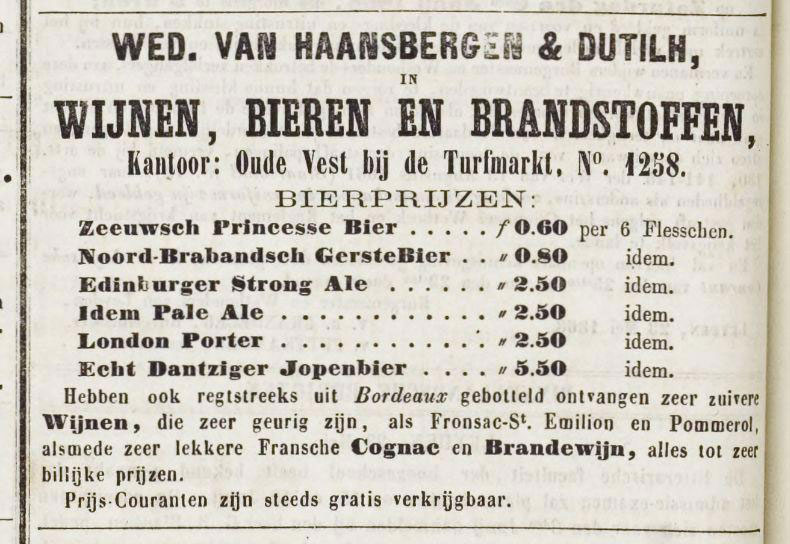