Unique and authentic things have an increasing lure and the story behind products are an important factor. Consumers are looking for the real thing and demand is so high that all kinds of stuff is sold as handcrafted and authentic. Craft beer is no exception and in the Netherlands there is an emerging consciousness about our heritage in beer. Question is: what’s for real and what’s less real in ‘historic’ brewing.

Original recipes
In the Netherlands there are many old city regulations on beer dating back to the high middle ages like on the historic styles Hoppenbier and Koyt. These regulations often contain instructions on what grains are to be used together with the maximum amounts of barrels to be filled with the beer. Reading carefully they also contain other information like on brewing techniques of old. Re-creating old styles of beer could involve things like kinds of water and yeast-strains, kinds of grains and their races, techniques on drying malt, fermentation on wood, etc. In practice even the basic use of the prescribed grains often proves to hard.

Rolled oats
The old city regulations where translated to the limited possibilities of the past decades, some ingredients were just not available anymore at the time. The most profitable was changing the prescribed oat-malt for rolled oats. Because to much rolled oats would have ruined the beer, most prescribed oats were conveniently changed around for barley. Original Hoppenbier was made with 75 - 80% oatmalt and 20 - 25% wheatmalt and this was changed into largely barleymalt, some rolled oats and some wheat. The same fate was destined for Koyt, it was recreated largely with barley and somehow stayed an authentic recipe.

The making of hoppenbier in Utrecht in 1404

New possibilities
Brewing with oat- and spelt-malt has become possible only recently. The availability of oat- and speltmalt is still very limited and brewing based on these grains is much more demanding than regular barley-based brewing. Only the best and most innovative brewers are up to this challenge. For the consumer it is very hard to make out what is real or less real in historic brewing. I’m just hoping to enhance awareness about these matters with my website.

Arc of Taste
The real Koyt was admitted into the Arc of Taste from SlowFood and was even described correctly by the Brewers Association in Dutch-Style Kuit (Kuyt, Koyt); ‘the distinctive character comes from use of minimum 45% oat malt’. A renewed chance for a piece of Dutch heritage, although the oat-malt must still be imported from England. Koyt remains on the verge of extinction and a real challenge for brewers. In 2016 brewers will compete in the new World Beer Cup category worldwide.

Beer based upon spelt: Liege beer

Rediscovered
Another beer-style based upon a different grain was the recent rediscovery of Liege beer. Liege beer was made in many Dutch towns and was originally based on speltmalt. Contemporary spelt has its caff removed witch makes it less useful but still, with some adjustments some Liege beers were made.

Unique character
Historic beer in the Low Countries is so special because of these unusual malts, with little or no barley. Barley is the basis of beer worldwide, but these beers are something very special. They need time for further development and are very hard to make. We also need more and better oat- and speltmalts, just like with barley because better malts are also the basis of improvement in more conventional beer.

(1a)
[Another new possibility is in brewing authentic Belgian style white beer and changing rolled oats and/or ricehulls for malted oats that originally belong in the beer.
f ]

The special character of the white beers of Brabant was created not only by the use of wheat and oats alongside barley malt, but also exotic spices and fruits brought to the Low Countries by Dutch traders. Hoegaarden became the centre for brewing the style, but in the 20th century the white beer breweries started to close, unable to compete with mass-marketed lagers, in particular those produced in Leuven by Stella Artois. The last brewery in Hoegaarden, Tomsin, pulled down the shutters in the late 1950s. It was mourned by many in the town, including Celis, a milkman who had done some part-time work in the brewery when he was a schoolboy.

(1b)
Interview with Christine Celis (citation)
2014

First Celis White of the Celis Brewery in Austin was launched in 1992. ’Two years later we couldn’t keep up with demand’, says Christine. ‘Our distributors we nagging because they had to wait for new batches for months, their customers were complaining. Then we were approached by Miller Brewing Company (now MillerCoors). They offered to help us build a bigger brewery. We made a deal with Miller. Soon that proved to have been a mistake. We had to compromise on quality and brew as cheap as possible. Sales dropped and we could no longer support our own beer. In 2000 Miller proposed to buy the brand. We agreed to their offer.’

[Hoegaarden beer (and wine) early 16th century (1514) together with other contemporary beers like Mum, Jopen- and Hamburg (= Koyt) beer.
f ] 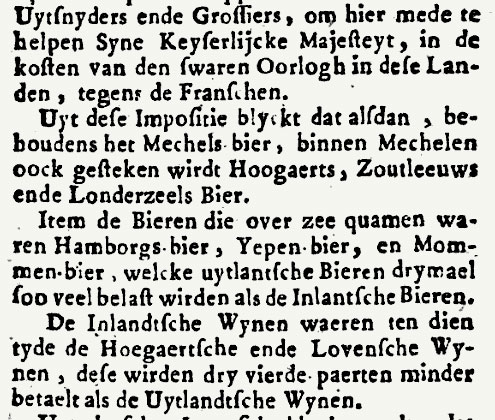