We used to call this table 'timetable of beer-styles' but noticed that people like to discuss endlessly whether some name truly represents the modern concept of a 'beer-style'. This table goes back beyond the concept of beer-styles to times and places where there was only 'our own beer' and 'strange' beer. Very early distinctions were made in old sources that sometimes specified or named these beers. This table is generic and filled with uncertainties. 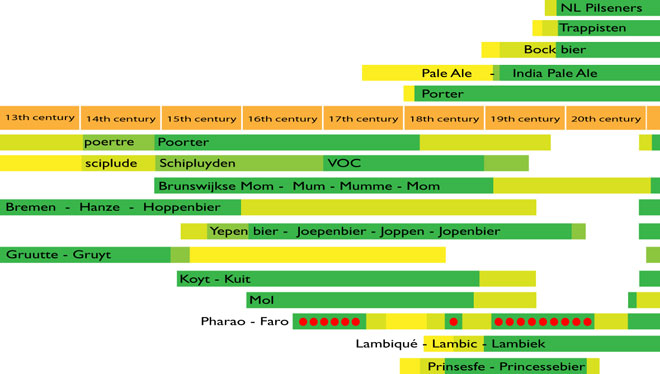 The End of Dutch beer
In the 19th century Dutch beer was more dead than alive. In some places a remainder of the old beers are found and in some places for example there still is Lambic being made. The first Trappist brewery started in the second half of the 19th century as well as a new Dutch brewery: Heineken. The monks only brew on a small scale but the Dutch brewers are really trying to make money with beer and look into the Bavarian method. At that time this still delivers summer and winter beer; beer for immediate consumption and durable beer depending on the season.

Dutch kinds of beer
Pharao beer is found in abundance from the 16th century onward in the wider Rotterdam region and exists today as a sweetened Lambic. Above that to the right are some cubes of different producers of old styles or names. In Nijmegen the old Mol was back, although it's uncertain whether it's still around. There's Hoppenbier and Koyt and there's a new Gruyt coming. We call this the renaissance of Dutch beer.

Centuries of brewing
Nice to see the enormous time some names were there since the high middle ages. The Netherlands and Belgium, together with Germany, truly have a unique place in beer history that goes back way beyond the forming of these nation states.